In September 2011, the Whisenhunt family in Longmont, CO wrote Air Vent a letter expressing how pleased they were with the performance of their Air Vent roof-mount solar powered fan they installed near the end of the summer 2010. “We have been comparing our electric usage before and after installation,” they wrote.

“The results are that the fan has saved enough in electric bills to nearly pay for the cost of the fan.” Prior to installing the fan they used 7 roof louvers for attic exhaust ventilation. The Whisenhunts installed a second roof-mount solar powered fan April 2012. The charts below show the kilowatt usage and the average temperatures before and after the installation of the fans.

Pay particular attention to June-August 2010 vs. 2011, 2012, 2013 into 2014. And see the dollar savings. Finally, see the “Notes” section in which the Whisenhunt’s documented the attic temperatures vs. outdoor temperatures. Their readings fall right in line with Air Vent’s recommendations that a balanced attic ventilation system should keep the attic no more than 15-20°F higher than the outdoor temperature. 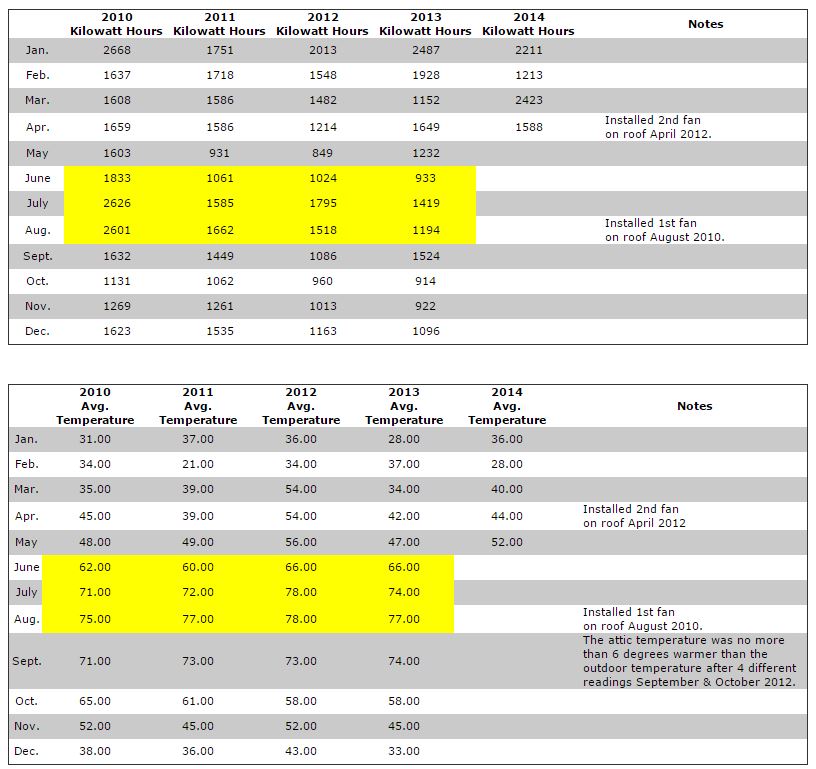 Save
Cookies user preferences
We use cookies to ensure you to get the best experience on our website. If you decline the use of cookies, this website may not function as expected.
Accept all
Decline all
Functional
By using this website, you agree to our use of cookies. We use cookies to provide you with a great experience and to help our website run effectively.
Analytics
Tools used to analyze the data to measure the effectiveness of a website and to understand how it works.
Google Analytics
Accept
Decline